Notations On Our World (Special Mid-Week Edition): On #Election2020 & Our World 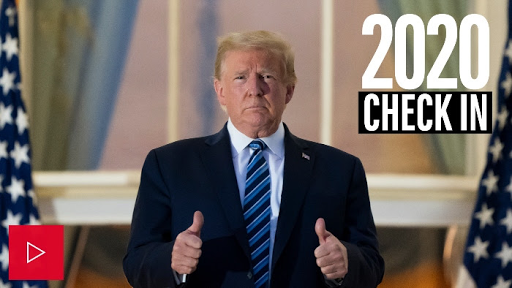 We hereby present the following on developments over the past couple of days on the eve of the Vice Presidential Debate here in the United States courtesy the team at Politico ,  the Financial Times ,  the Washington Post ,  the Washington Times & Esquire:

The world is on the brink of a terrible milestone: 1 million people dead as a result of the coronavirus pandemic. It has divided countries from within, yet unites the world in common anguish and loss. From the first days of mass deaths in China to the United States eclipsing 200,000 fatalities last week, this visual story explains how we got here.

The Centers for Disease Control and Prevention has for decades been a trusted source of health information not only for policymakers but also the public. It battled polio and malaria. It helped eradicate smallpox. But 2020 has been a disaster for the CDC. Amid a pandemic that has killed more than 200,000 people in the United States, it has had technical and messaging blunders. It has been under siege from false accusations and interference from the Trump administration. In all, the CDC has lost institutional credibility when we need it the most.

IS IT OVER? Here is what everyone in Washington is thinking but does not want to say out loud: President Donald Trump is going to lose this election in 28 days, probably by a large margin.

A growing number of insiders, including many Republicans, are starting to venture — privately — that this outcome is likely to be clear on Election Night, not days or weeks later.

And Trump’s collapse is likely to take Republican control of the Senate with him.

Is this a certainty? No. We all remember 2016. But the system is blinking red:

— Biden’s lead has been growing since the first debate, an event Republicans pointed to as the key event where Trump might turn things around.

— The crucial states of Michigan, Wisconsin and Pennsylvania, which was one of the few good polling states for Trump, have all been trending clearly toward Biden.

— All of the polls behind this assessment were completed before today, when the president abruptly abandoned negotiations on a Covid relief bill, which could have provided an economic lifeline to millions of Americans.

This is the conventional wisdom, though it is rarely said publicly. It’s been expressed by a number of glum Republicans we’ve talked to since the debate and the subsequent news of the White House becoming a Covid hot spot. “Today feels like the election’s over,” a veteran Republican strategist said Sunday.

But again, we all remember 2016. So there is a quiet conspiracy to emphasize the uncertainty and stress to readers and viewers that anything could still happen.

Here’s where the protocols of journalism require a meaty paragraph of qualifiers and caveats known in the business as the “to be sure graf.” In the event of a Trump victory I can point to the following as evidence that you were warned this thesis might be wrong:

— The popular vote could be disguising another Trump path to an Electoral College victory. The national polls in 2016 were not that far off. Biden could perhaps win nationally by an even larger margin than Hillary Clinton did and still not get to 270 electoral votes.

— Republicans insist there is a massive “shy Trump” vote that doesn’t register in the polls but will spring to life in the privacy of the ballot.

— There are a series of unprecedented events gripping the country — the pandemic, the recession, nationwide protests — and so historical models from normal election years don’t serve as much of a guide.

— Polling might be spectacularly wrong for one or more of these reasons.

Steve Shepard, POLITICO’s senior elections editor and resident polling expert, notes that the recent spate of double-digit national polls showing big Biden leads may be the result of depressed Republicans refusing to answer the phone after the first debate. Bill McInturff, the Republican half of the bipartisan polling duo who conducts the NBC/WSJ poll, said that drop in response rate may mean Biden’s lead is more like 8 or 9 points, Steve points out.

Steve adds: “I compare it to how people feel after their favorite sports team loses a big game. They don’t really want to talk about it. So there’s an argument here that polling is catching Trump at a low point, but he’s still in awful shape.”