Notations On Our World (Special Edition): Goldman Sachs Speaks On The Investment Outlook

As August looms, Our team received this courtesy of the team at Goldman Sachs which we wanted to feature in light of the uncertainties before us in the Economic landscape due to Tariffs and other decisions by the Trump Administration:

Notations From the Grid (Special Month-End Edition): Brief Thoughts On Our World....

It has been quite a month in our World as we bid farewell to July and gear up for a very busy August here in our properties.    The elections in Pakistan, Zimbabwe and Mali along with the continued controversies surrounding the President of the United States has been quite a scene to be witness to.  This is as Israel passed the Nation-State Law that led to a resignation by an Arab Member of the Knesset, Israel's Parliament.     Syria, in the meantime, is also in the news as the end of the War appears to be in sight even though the war continues onward with no end in sight.   We also were witness to changes in the Media Landscape as the parent of the Sydney Morning Herald, FairFax Media was bought out for 4 Billion Dollars and Disney's buyout of 21st Century Entertainment Assets was finalized.

It has been an interesting week in our World as we have continued to assess the on-going realities in Iran.     The week began with comments from President Rouhani noting how The US had a chance to either come to terms with Iran or go to war--warning President Trump not to Play with a Lions Tail because it will have consequences.   This is as a question was asked by many in the Iranian Disapora captured in this headline from the LA Times' Sarah Parvini: 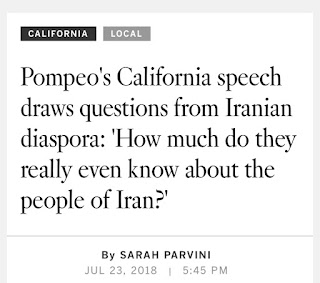 Iran has seen a number of Cabinet changes by the President as the Currency has collapsed and the price of Gold Coins (a harbinger of Economic Health) has began to soar as People take refuge in such resources.    The war of words has continued so far--including the Parliament Speaker calling the President a Thug and The latest that came out of the Commander of the Quds Force.    Qasem Sulemani came out and warned the United States that the Quds Force had the ability to deal with anything the United States threw at it.  This is as another of the Senior Commanders (and current Secretary of the Expediency Council), Mohsen Rezaai, reminded the US that Iran had over 50,000 US Troops in its' sights.     The attacks by the Houthis against Saudi Tankers earlier this week may well have been one indication of Iran's Sabre Rattling.

Beyond Iran, there is Syria.   It is increasingly clear that Assad has won and such a win is winning grudging acceptance by the World.    As we went to press, there was a Syrian Plane that was shut down and suicide bombers struck Government areas yet again.   This is as Russia sent a delegation to Lebanon to facilitate the return of refugees back to Syria--over 1 Million Syrians live in Lebanon that constitute almost one quarter of Lebanon's Population.   We have also been assessing the on-going election in Pakistan as Imran Khan seems to be in a pole position to form Pakistan's Next Government--we will continue to assess it an provide updates through our Media Virtual Circle over the ensuing days.

We Leave you all with some "Random Thoughts" : 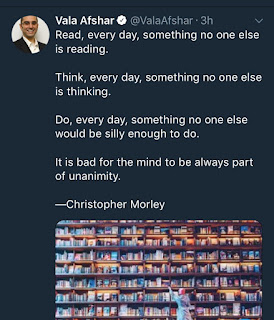 As our team continues its' on-going assessment, please enjoy these selections on another realistic check on the reality at hand as Trevor Noah also reflects upon the visit by @BarackObama to Africa on the occasion of #Madiba100:

Notations On Our World (Weekly Edition): On #Iran, #Israel & #Syria

It has been quite a weekend in our World.     We hereby commend Israel for facilitating the evacuation of 800 Syrian White Helmets and their families from Syria.   We are also of the view that is shared by many that it appears that Bashar Assad has apparently won as we saw reports of how things seem to be getting back to normal in Syria.

Beyond Syria, there is Iran.   The US Secretary of State made a speech at the Reagan Library over the weekend that we hereby present courtesy of the State Department laying out the Trump Administration's assessment of the situation in Iran--as the Iranian President, Hassan Rouhani, came out swinging with his own attack on the Trump Administration.     Late Sunday night, President Trump responded in kind on Twitter In Capital Letters:

To Iranian President Rouhani: NEVER, EVER THREATEN THE UNITED STATES AGAIN OR YOU WILL SUFFER CONSEQUENCES THE LIKES OF WHICH FEW THROUGHOUT HISTORY HAVE EVER SUFFERED BEFORE. WE ARE NO LONGER A COUNTRY THAT WILL STAND FOR YOUR DEMENTED WORDS OF VIOLENCE & DEATH. BE CAUTIOUS!
— Donald J. Trump (@realDonaldTrump) July 23, 2018

The Secretary of State specifically  named names including the head of the Judiciary and other key Ayatollah's and corrupt Revolutionary Guard Officials.   Here is his speech in full that we will have more to say on it--as  the Secretary of State some known realities about the state of affairs inside Iran today:

Notations On Our World (Special Friday Edition): "Earth From Space"

As we welcome all to Friday here in our Properties, our team decided to do things a "little different" as we hope all enjoy this live feed from the International Space Station which is available live by clicking on it here  as we go dark in our Properties throughout the weekend:

Notations From the Grid (Weekly Edition): On @POTUS Watch regarding #HelsinkiSummit2018

#Helsinki2018 aftermath continues.  Our team picked up analysis from some in the Conservative Media noting that the so-called "Left" or "Resistance" was in a state of Hysteria.   Jonathan Capeheart of the Washington Post compared the GOP reaction to what happens when the GOP comes out with its' "Thoughts & Prayers" Foreign Policy Edition especially in light of this very interesting article in Bloomberg View.

The Day after and the Aftermath was noted by Seth Meyers and Trevor Noah:

As we went to press, the President walked back his comments yet again in an interview with CBS News as he held President Putin responsible in spite of what was discussed regarding Ambassador McFaul and Bill Browder that we released guidance on yesterday

Notations From the Grid (Special @POTUS Edition): On the Aftermath of #Helsinki2018


As the aftermath of #Helsinki continues, this was the latest courtesy of MSNBC--this is as President Trump gave an interview to CBS News stating that he holds Vladimir Putin responsible and he conveyed it to him during their one-on-one.      This is also as apparently the case of Bill Browder came up and the question was asked at the Daily White House Press Briefing regarding questioning the former US Ambassador to Russia Michael McFaul  and a Professor at Stanford: 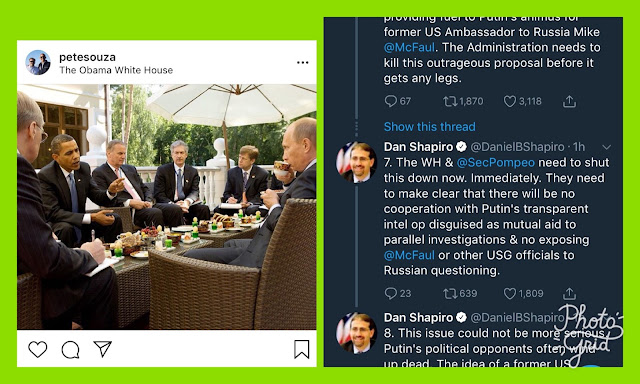 Our team created this grid of a meeting President Obama had while Ambassador McFaul served on the White House Staff with reaction from among other people including former Ambassador to Israel Dan Shapiro.

As we went to press here in our Virtual Studios here in Laguna Niguel, it is Wednesday in South Africa and officially Mandela Day.    Former US President @BarackObama delivered the annual Mandela Lecture and we hereby present the whole event courtesy of the Obama Foundation which also featured comments by the President of South Africa and the Widow of Nelson Mandela.

Notations From the Grid (Weekly Edition): Out & About in Our World ((With an Update From Africa)) 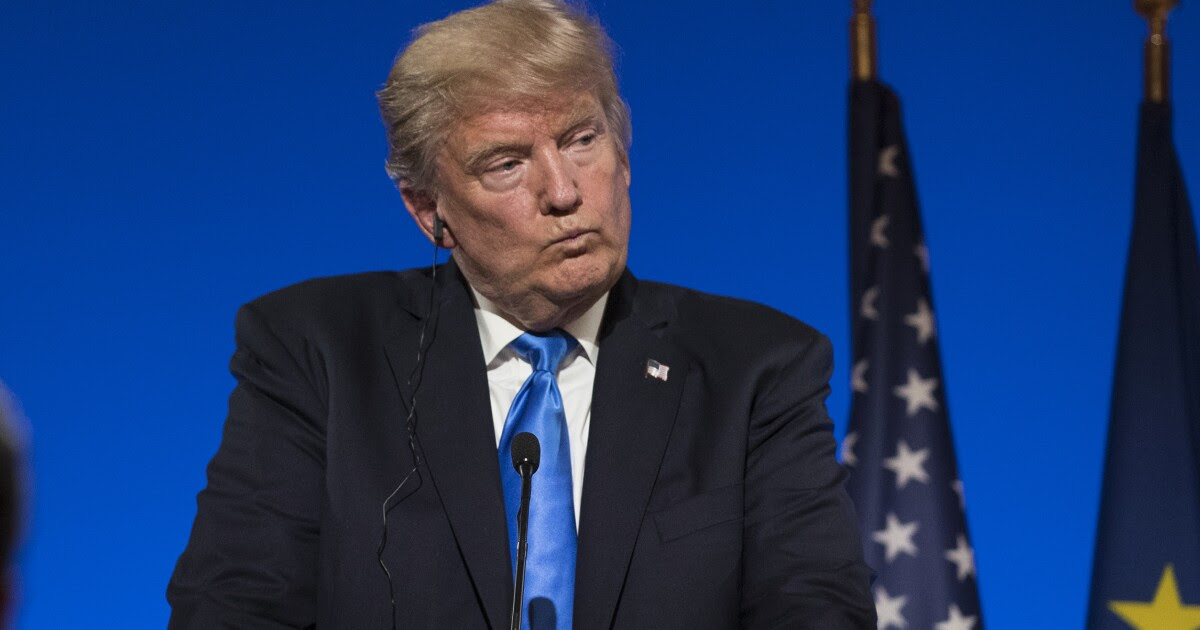 As our team went to press, President Trump had left Scotland after a 2-Day non working getaway at his resort to meet with the President of Russia in Finland.    Before he left, though, he gave an interview to CBS News which was reported out by the Team at the Washington Examiner in this manner--and an apparent suggestion that The UK should sue the EU--which the UK Prime Minister noted she decided not to take: