Notations From the Grid (Special Edition): On #LifeIntheAgeofCorona ((Updates))

The War on Corona is continuing worldwide.   Our Hometown, Laguna Niguel, declared a local emergency yesterday and activated the local Emergency Operations Center.     Six Counties in Northern California declared a shelter-in-place order.    Our team has joined the local Second Harvest Food Bank on the Status of their efforts to be operational to support all Food Pantries throughout Orange County as Orange County ordered a shelter in Place Order & as this occurred:


Here is a sampling of the updates on developments around the World courtesy the team at The Financial Times and Resources For the Future:


What is critical, also, is to start thinking about lessons learnt.   We commend the team led by Peter Diamandis in pulling these lessons from China as it has begun to "Flatten the Curve":

(1) Fill the Skies With Drones

Right now, drones above various parts of China are sharing information on loudspeakers, carrying signs with QR codes (for no-contact registration purposes), spraying disinfectant, delivering packages, and taking people’s temperatures.
To conduct temperature measurements, drones use infrared thermal imaging, which has not only proven more accurate than human-conducted readings, but also massively expedites the evacuation of community personnel. Simultaneously, drone readings have helped reduce close contact between community workers and residents, minimizing risk of secondary infection.
Shenzhen-based DJI has created a 10 million RMB fund to fight the Coronavirus, funding drone-enabled disinfection and protocols. Meanwhile, XAG — China’s No. 1 agriculture drone tech company — set up a 50 million RMB fund to use drones for disinfection in remote areas.
And in a surging nationwide effort, more and more Chinese towns have used plant protection drones to carry out disinfection operations during the outbreak. In Shandong province, for instance, villagers of Huji town used only two plant protection UAVs to disinfect about 480,000 square meters of the village in less than an afternoon.
But beyond agricultural uses, UAVs are now conducting unmanned delivery of medical supplies and the like. Having taken its maiden flight on February 6, a now routine drone flies to the center for disease control in Xinchang County, spanning the nation’s first anti-epidemic “urban air transport channel.”
Other unmanned delivery devices, such as in Wuhan, have transported medical supplies between JD logistics stations and local hospitals, avoiding vehicles and pedestrians in transit. And early on, Zhejiang Xinchang People's Hospital took the lead in using drones to transport samples for examination. Capable of automatically transporting up to 4kg of supplies between two unmanned stations without human operation, these drones tremendously reduce the risk of cross-infection.
How might our own local and state governments coordinate similar drone routes with hospitals, retirement homes, apartment buildings, aid centers, and others?

Hospitals across Beijing, Zhejiang, Guangdong, Hubei and Hunan already have zero-contact distribution server robots.
Medical staff place items on robots, robots go to patients’ doors, and patients receive items contact-free. After completing a route, robots automatically return to the nurse’s station, where they are disinfected and continue delivery. In some hospitals, these robots can even provide contact-free delivery service to 20 wards, on average.
And in the F&B arena, robots and driverless vehicles are now servicing hospitals and communities alike with touch-free delivery of everything from coffee (Luckin’s “ruiji” machine) to fresh vegetables.
In the case of the latter, driverless cars now complete 24 deliveries every 30 minutes, greatly reducing the burden of front-line delivery staff.
Prompted by the outbreak, zero-contact distribution, self-driving freight, robo-taxis and other forms of autonomous navigation are now exploding business opportunities.

(3) Bring on the Biotech

Already, one medical company (999) has released a new food line of “medicinal” noodles, touting immune-boosting ingredients, in an attempt to help stem vulnerability to infection.
Although in disparate industries, carmakers (BYD and Baojun) and iPhone manufacturers (Foxconn and Changying Precision) are churning out face masks faster than face mask manufacturers themselves.
Government and private sector capital is flooding biomedical services and medical technologies. A mere four days after the stock market opened this year, the biggest gainers were pharmaceutical businesses, medical device services, biological products and chemical pharmaceuticals — all up more than 10%.
Online consultations have gone from non-existent to the new norm.
According to Ali Health data, even prior to the end of January, total visitors to online free clinics exceeded 2.8 million, while servicing doctors surpassed 1,000. Meanwhile, online medical service platforms, such as Dingxiangyisheng (丁香医生), Haodaifuzaixian (好大夫在线), Pinganhaoyisheng (平安好医生) and Weiyi (微医), launched online diagnosis services for Coronavirus symptoms to avoid false-positive visits to hospitals.
Damo Academy, Alibaba’s future-driven research institute, can now test Coronavirus infection with AI analytics at a reported 96% accuracy rate by simply looking at a CT scan.
This new algorithm could tremendously alleviate pressure on hospitals, completing recognition processes in 20 seconds — far faster than the 5-15 minutes it takes a doctor to do the same.

More than 20 provinces, including Guangdong, Jiangsu and Henan, have now joined China’s “home-schooling” program, as over 10,000 primary and secondary schools and 5 million students attend classes via live streaming.
The boom in China’s virtual classrooms and online education has been utterly unprecedented, serving as an example the world can follow.
On February 7, China’s Ministry of Education shared instructions on the deployment of online teaching for students to resume classes from the safety of their homes, providing 24,000 online courses from more than 20 online platforms for FREE.
Meanwhile, this spring semester, 3,923 courses at Tsinghua University (China’s top STEM university) and 4,437 courses at Peking University (China’s top liberal arts college equivalent) will be taught through MOOCs, recorded courses, live streaming, and teleconferencing.
Countless online education companies are sharing free online courses for K-12 students, including Tencent Classroom, DingTalk, Zuoyebang, Yuanfudao, and VIPkid.
And while free education services help students, the EdTech business is booming.
In the long run, this surge in (what was at first interim) virtual education could dramatically change the face of K-12 and higher education, as penetration and conversation rates multiply.
More generally, OMO (online-merge-offline) environments will leap onto the scene, driving digitization, iteration speed, and operational efficiency of the education and professional training industries.
How will EdTech companies rise to this challenge in our own communities? Institutions? Universities? How will businesses seize this opportunity for a latent exploding market while serving the needs of millions?

Putting health and safety above mid-term economic growth, the world’s biggest remote work experiment has been unleashed by COVID-19.
On a recent earnings call, Alibaba CEO Daniel Zhang told investors that, while a tremendous challenge for society, Coronavirus also gives people a “chance to try a new way of living and new way of work.”
As Chinese New Year approached its end, Alibaba’s DingTalk app quickly became the most downloaded free iOS app in China, and has remained #1 for the last few weeks. On February 3rd alone, users from over 10 million corporations used DingTalk, now leveraging its team chat groups, org charts and teleconferencing features. Companies can also track attendance and overtime hours automatically through the app.
Tencent has also seen dramatic growth in demand for its work tools. Now among the top five most downloaded free iOS apps in China, WeChat Work and video-conferencing app Tencent Meeting are serving millions of firms.
After recording a tenfold increase on February 10th (when many companies and schools resumed work), WeChat Work is now used by over 2.5 million companies, covering 60 million corporate users.
Compared with their foreign peers, like Slack, Chinese apps have jumped on “China Speed” to meet the unique demands of Chinese employees.
Released by TikTok's parent company ByteDance, corporate messaging app Feishu (which offers file-sharing and document-editing capabilities) has now released a “health management” platform, allowing workers to log location and daily temperature.
Staying home and avoiding contact is crucial. And every person counts. But in the interim, our ability to build and iterate on fully digitized platforms for the future of work is a forced opportunity like no other. And as I’ve said before, never waste a crisis…. 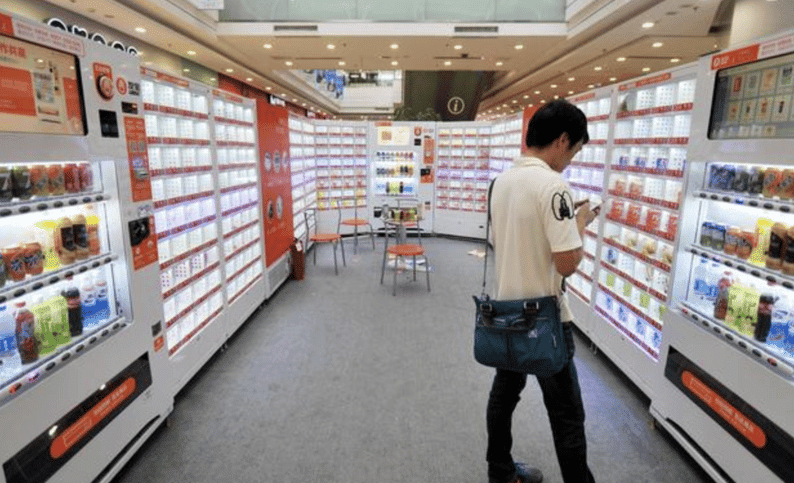 Enter next-gen e-commerce and unmanned retail.
After completion of the new Wuhan hospital, an unmanned supermarket was launched within a day.
Open 24/7, the supermarket touts self-service checkout (no receipts), and received over 200 customers on its opening day. While it was reported that Jack Ma’s original launch of an “unmanned supermarket” in 2017 lost him about 4 billion RMB since then, the concept has now hit perfect timing. And companies from Meituan and Ele me to KFC have launched “no-contact distribution” services one after the next amidst Coronavirus.
While China’s e-commerce ecosystem is already far ahead of the rest of the world, there are still numerous items people prefer to buy offline.
But post-outbreak in China, buying groceries online has also become the norm. China’s Sinopec petrol stations now sell no-contact groceries: buy online, and have groceries put directly into the trunk of your car. No need to leave the driver’s seat or even open the window.
What novel business platforms will allow us to revolutionize no-contact, autonomous retail?

China has charged full-force into building emergency centers (hospitals), locking down outbreak epicenters, and mobilizing resources over the last few months at ‘China Speed.’
Integrating drones, robots, e-commerce platforms and novel biotech (as discussed above), the smart city has become an integrated platform for defending society against Coronavirus’s spread.
China has also showcased an extraordinary example of mutual accountability between government and populace. We already caught a glimpse of this when China’s government constructed 2 hospitals in fewer than 10 days as millions watched a live-stream of real-time progress, keeping their government accountable to its promise.
While we have yet to see how 21st century smart cities serve as community defense mechanisms, their help in protecting against outbreak in China should spur capital investment and innovation across our own smart cities worldwide. (Already, the Chinese government predicts public and private investment of 500 billion RMB (US$74 billion) in the nation’s smart cities.)
Creating a network of real-time information, WeChat and Baidu Maps have released clinic information covering over 100 cities across China, and over 3,000 clinics. Patients can now find designated hospitals qualified to treat fever and Coronavirus on their phones, drastically reducing confusion and wait times.
Smart cities can be further integrated in response efforts through the use of big data and cloud computing.
Cities might be equipped with early-warning mechanisms to rapidly detect infection, notify communities, and stem spread before it begins.
Now the new normal in China, smart cities are becoming preventative tools, whereby everything is tracked and analyzed for rapid decision-making in real-time.