Notations On Our World (Weekly Edition): On the Week that Was.....

Well, it has been quite a week!!!   Iran saw the resignation and subsequent change of heart  of the Foreign Minister, Javad Zarif.   This is as Bashar Assad was taken to Tehran to meet the Iranian Supreme Leader, Ali Khameini for ostensibly 2 hours and thereafter rushed to see President Rouhani.   This is as we are seeing reports that Iran's only functioning Nuclear Power Plant in the South is being shut down.

President Trump is back in the United States trying to recover after the North Korean summit in Vietnam (and yes we agree, Vietnam is the true untold story) as he  rehashed what many note is his greatest hits at CPAC going after all the usual targets--Special Counsel Mueller, the Democrats and the Media.    His aides were on the US Public Affair Airways trying to create a success spin as Seth Meyers noted a sense of the true reality:


This is as  our team was also focused on was India and Pakistan as both countries continued their low-intensity warfare that including border shelling, Aircraft being shut down and soldiers dying.     It will be quite a week ahead as China begins its' Annual meeting of the National People's Congress with what the Financial Times noted as "Tea For 5,000" as it grapples with its' profound challenges including an estimated 65 Million Empty Apartments, an economic tug of war with the United States along with a profound long-term problem--an aging population.     We conclude with the US as we note how the US Democratic Fields continues to expand--and again we turned to Seth Meyers to insure that a sense of perspective was at hand:


One of our must reads, @Kaltoons of the Economist captured it all as well on the State of the Democrats as Bernie Sanders launched his bid: 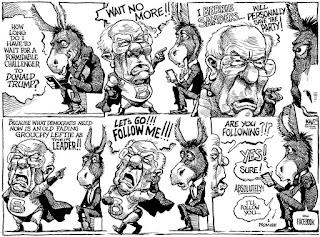 As we reflected upon the week on this "unplug" weekend, we turned to Trevor Noah that pretty much captured it all for all:

It is bound to be an interesting week yet again.