Working Away: Some Mid-Week Thoughts on #WEF2016; @RealDonaldTrump & @PlutoKiller


It was quite a day around our World as Markets took a major tumble.   Although I saw that US markets somehow got their footing at the last minute, it was terrible in London as some $ 50 Billion Pounds were wiped off British Companies.

I was also taken aback as I saw rumrous of Twitter being bought out by News Corp.    Twitter has been down 41% since Jack Dorsey took charge as CEO and closed at around $ 17.50 a share today.   I was personally amused at the rumours especially as News Corp took a major hit the last time it took a chance on a social media strategy--anyone remember My Space!!!

I have also been on the "virtual prowl" @ #Davos2016  (Since I can't afford the $ 30,000 Entry Fee right now!!!).    The theme is the 4th Industrial Revolution and a always it is quite a show.   Notations will be on hand daily as I hope all "pop in" to check out the available sessions.     I was blown away by the Microsoft Commitment to give away $ 1 Billion Dollars to Non-Profits.

Back here in the United States, Governors have been giving their State of the State addresses.    I hope to catch Governor Brown's tomorrow that is slated to be given at 10:00 AM California Time.     The Presidential Campaigns have also been on the prowl ever more as Donald Trump gained the endorsement of Sarah Palin and John Wayne's Daughter.    Sarah Palin was in her element yesterday and I viewed it as entertaining to watch.     It was also of interest to me as The Governor of Iowa came out and he would like Cruz defeated.    What I found especially of note was this that was published in Golf Magazine as the Trump Juggernaut continues:

I thought this from the Washington Post's James Hohman gave a solid overview of all things that occured as the President spoke last week and thehe aftermath of the #SOTU2016 (which is "Twitter Speak" for the State of The Union 2016):     The snapshot is well worth noting in terms of the discourse and the on-going @realDonaldTrump juggernaut that has defied all the conventional so far:

THE BIG IDEA:
— Barack Obama never mentioned Donald Trump by name during his hour-long State of the Union last night, but he didn’t need to.The millions of Americans who tuned in – for the largest audience that the president may get in 2016 – knew that he was talking about the Republican frontrunner. That alone is a testament to the extent to which the billionaire businessman and first-time political candidate has disrupted the political debate in this country.
Cynics says Obama was trying to elevate Trump to help Democrats, but the reality is simpler: The president, like almost every elected official in Washington, genuinely sees The Donald as a frightening challenge to our country’s institutions and anathema to its values.
Obama also knows that much of what he has accomplished over the past seven years will be rolled back if a Republican succeeds him. And the speech sought to frame the campaign to succeed him in those terms.
“America has been through big changes before,” Obama said. “Each time, there have been those who told us to fear the future — promising to restore past glory if we just got some group or idea that was threatening America under control. And each time, we overcame those fears. … Will we respond to the changes of our time with fear, turning inward as a nation, and turning against each other as a people?”
Some of the presidential shots across the bow at Trump:
Obama took implicit digs at other GOP candidates too:
— The speech was not a speech to Congress. “It was a sermon to the nation,” Dana Milbank explains. “The president was late to find his moral voice, but it was important that he spoke.”
— Bigger picture, the presidential campaign has overshadowed the president. That much was clear when he opened with a joke about keeping his speech short so that some in the room could “get back to Iowa.” 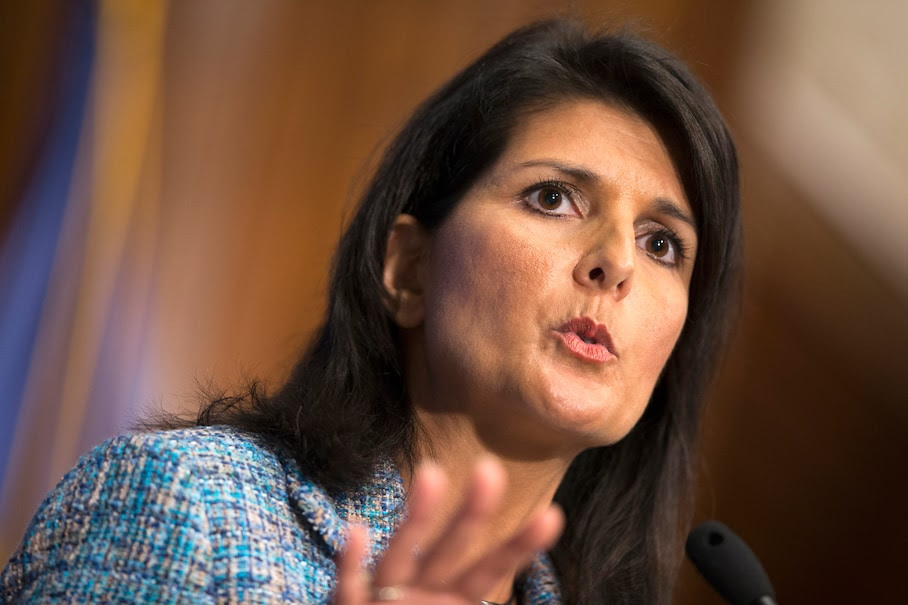 — In the latest sign that the GOP establishment fears an electoral debacle if Trump is the nominee, the official Republican response from Nikki Haley also made the case – albeit a little more gently – against going down the path Trump offers. “During anxious times, it can be tempting to follow the siren call of the angriest voices,” the South Carolina governor said. “We must resist that temptation.”
— Haley’s speech has become a Rorschach test on the right.
The far right hated it.
More mainstream elites in the right-leaning media loved Haley’s speech:
The responses from some of Trump’s GOP rivals echoed Haley to varying degrees. “We cannot elect Hillary Clinton to the White House,”Carly Fiorina posted on Facebook. “One thing is clear: Hillary Clinton will wipe the floor with Donald Trump.”
— The official Spanish-language GOP response was meaningfully different. The Miami Herald flags that the language on immigration was “decidedly softer” in the version delivered en Espanol by Rep. Mario Diaz-Balart (R-Fla.)
What I found especially interesting is the new Book by E J Dionne which I hope to pick up soon.  Excerpts of it were published over the past 24 hours as the campaign is gathering steam.

As I finished off my "Virtual Walk-About", I could not help but be excited by the discovery of the 9th Planet:

This is just the stuff truly out of scienece fiction.    Cal Tech was at the forefront of it--and I had the good fortune to be at Cal Tech for one Summer studying Physics--and loved it!!!      We will also be on the prowl for it as this further develops.    One staggering statistic:  It takes this planet 20,000 years to orbit the Sun!!   Please click on this from Cal Tech.       Our world is truly a better place becuase of such men who go beyond the now always.   I hope such will be the case as our #Ousider journey continues.