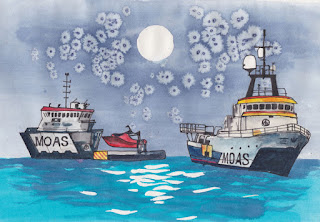 We begin our final retrospective of the year with a tribute to MOAS and all organizations throughout the World who have made such a profound difference for the less fortunate.


Please enjoy this latest from MOAS that speaks volumes:
The story is compelling.   This is as we're  monitoring reports on a hijacked plane that was diverted to Malta from Libya with apparent pro-Gaddafi Supporters which underscores the precarious position Libya continues to be in as she has been struggling under a new National Unity Government,    The hijackers have just surrendered after having released all passengers earlier.    The Chancellor of Germany also spoke within the past hour after the killing of the Berlin Christmas Market attacker especially as criticism continues to mount against the Chancellor.

What is clear is this:  2016 has been quite challenging.    Our team found it very troubling as we continued to monitor on-going developments in Africa.   Zimbabwe continued to suffer as some 4 Million children will go hungry.   This is as the ruling ZANU-PF conveyed a conference that cost apparently 7 Million Dollars.   This is also as Robert Mugabe has said that he wishes to run for re-election again in 2018.     What was quite startling is how to the Deputy President of South Africa expressed admiration for Mr. Mugabe and how he wished that the ANC was like ZANU-PF.   South Africa itself continues to face profound challenges with unemployment and corruption as well.    Although one bright spot was the fight against the Boko Haram in Nigeria,  Congo and Gambia continue to be hotspots.    The President of the Democratic Republic of Congo, Joseph Kabila, refuses to stand down citing the fact that the Country is not stable for new elections.  The Gambia's incumbent President has also refused to step down and rejected the outcome.

Moving North to Europe, the transformation of Europe was also quite remarkable.   Britan voted to leave to the European Union and 2017 is going to be quite challenging to both parties.   One indication fo the challenge is a 50 Billion Euro cost to Britain to extracate itself from the European.  France is also dealing with change as Francois Hollande decided not to run for re-election and France finally said no to Sarkozy.   Spain continues to be challenged with its' long-term prospects as Greece also is again on the brink.   Russia continues its' ascendancy as it has helped to prevail in Syria and has continued making inroads in Eastern Europe--including Ukraine which is not in the current headlines.

Beyond Europe, there is also the Middle East.   Our view has been that the tumulus year in the Middle East has continued to hold the World Hostage.   The coup in Turkey continues to have implications both for Turkey and the region--as epitomized by attacks throughout the Country.  The horrific murder of the Russian Ambassador this week underscores the precarious nature of security in Turkey right now.    The tragedy of Syria seems to have no end as the World was witness to the atrocities in Aleppo as the rebels suffered a major defeat.    We were proud of our effort in helping to showcase the atrocities.       Turkey is also in Syria as we saw reports of Turkish soldiers being burnt alive.         Turkey, Iran and Russia had a meeting of Foreign Ministers earlier in the week agreeing to be the guarantors of peace--and as we went to press, it has been announced that the Turkish, Russian and Iranian Presidents will be meeting in Astana in mid-January 2017 as the war in Syria continues with no apparent end in sight.   Iran itself continues to face some profound challenges as the incumbent President, Mr Rouhani, begins his re-election effort.     Airbus has finalized a deal to sell 100 planes to Iran.    The Government has boasted of its' record to have created over 1 Million Jobs.  This is as the President just issued his long-awaited promised Citizens' Manifesto that is an interesting read.     There is also Yemen--as the war continues with no end in sight under the continued onslaught of a Saudi-Led coalition.

As we continue our final roundup of our World, we have been listening to a debate on +NDTV  on demonetization in India to combat black money.   India has been at the forefront of change under the Indian Prime Minister.    China has also been at the forefront with its' moves around the World despite its' profound challenges on the Environment and the Economy.    China has also been quite vocal  in its' concerns on the moves by the incoming President of the United States.   China, also, has been working to preempt the United States as with the moves with the new President of the Phllipines, Mr. Duerte.   Mr. Duerte has launched a war of drugs that has cost some 6,000 lives so far and over 40,000 people have voluntarily turned themselves in.   He has boasted about killing three people to motivate the local police force to be fearless--and his latest tirade was against the UN Human Rights Offical as he called him an idiot.

Moving onward to the Americas, one bright spot we were witness to was peace in Colombia.  The President of Colombia was awarded the Nobel Peace Prize which he dedicated to the Colombian People.    Although challenges remain to implement it, it is The World has also been     Our World has been Witness to Venezuela imploding daily.  Stories about women selling strands of hair to eat has been heart wrenching to read.    There is also Cuba--as Cuba bid farewell to Fidel Castro and as the openings with the United States continued.      There is also the on-going developments as Donald Trump is gearing up to take office.

We have been monitoring events out of the United Nations about an upcoming Resolution regarding Israeli Settlements.   Egypt backed out of co-sponsoring the resolution after a phone call from Donald Trump.   New Zeland and Venezuela are about to introduce the resolution and all eyes will be on the United States to see whether there will be another veto vote or an abstain vote.   This is part of what some have noted as Mr. Trump's rather unconventional style as he prepares to assume office on January 20.     Our team compiled some of the interesting "tidbits" from "Social Media" on his moves from the Facebook wall of Former Labor Secretary Robert Reich:

There have been some interesting nominations--including Rex Tillerson at the Department of State and James Mattis at Defense (although his views on Iran is somewhat of concern). There is also Mr Trump's choice to head the Office of Management & Budget--who is an avid advocate of outsourcing.    Peter Navarro, a Professor at UC Irvine, has been tapped to head a new National Trade Council (and China has not been happy about it).

Keith Olberman was quite lively in his criticism as underscored by this Tweet:

In just over seven weeks we will inaugurate a manifestly insane man as president. But the media won't discuss it: pic.twitter.com/QxAbPnPCKy
— Keith Olbermann (@KeithOlbermann) November 30, 2016

There has also been the debate over flag burning and the concerns raised over Mr. Trump's Twitter engagement as also epitomized by the latest over the nuclear arms race:

. "It’s interesting that so many of the people who are eager to punish flag-burners, like Mr. Trump, are at the same time so untroubled by speech that offends minorities, women and other Americans. ...

... Flag-burning is constitutionally protected free speech. The Supreme Court has made this clear, in a ruling joined by Mr. Trump’s favorite justice, Antonin Scalia. It’s popular to want to punish flag-burners — pandering politicians, including Hillary Clinton, have tried. But the First Amendment exists to protect unpopular, even repulsive forms of expression. As the Supreme Court said in a 1990 decision finding a federal law against flag-burning unconstitutional, “Punishing desecration of the flag dilutes the very freedom that makes this emblem so revered, and worth revering.” ...
... The court, by the way, has also declared that citizenship cannot be stripped away, not by Congress or the president, not in this democracy. ...
... He has more than 16 million Twitter followers. With Twitter, Facebook and Instagram, he can feed lies and ignorance directly to 36 million people.
He tweets, he posts, he incites. He trolls. He commands a global platform and will soon be America’s commander in chief. But it has to be said, and said again: This is not normal. It demeans the presidency." ...

This is from the Writer Marc Cooper:

"While liberals continue to fever panic over fascism, Muslim internment camps, the collapse of the Republic, Russian propaganda, rigged voting machines and other fantasy night sweats, the incoming administration is quietly and much more mundanely planning to dismantle Obamacare, voucherize Medicare and public schools, raise the retirement age and push downward on wages while giving our oligarchs yet another tax cut.
"Y'all better get your shite together, get your feet on the ground and push back against the real enemies facing us rather than conjuring new ones."

In the past quarter-century liberalism has had it too easy, but 2016 was a wake-up call https://t.co/XQCdJNqzmV

This is as harassment has continued as epitomized by this from the Persian-American Writer Porochista Khakpour that she wrote on her facebook Wall:

One of the more controversial moves has been Mr. Trump's appointment to head the EPA.  Jeb Bush welcomed the move--but we found it quite interesting on the view of the Vice President Elect on Deepwater Horizon:

Mike Pence referring to Deepwater Horizon as a "natural disaster".

Along with this on the reality at the front lines of Climate change in Alaska:

"They do not want to move and I have to accept that.  But if they want to live here, they have to have a way to get out of Dodge when getting out is required."
DAVID WILLIAMS, a project engineer for the Alaska division of the Corps of Engineers and a member of an interagency group that is helping endangered villages plan for the future, on Shaktoolik, Alaska, which decided against relocation to stay and fight the effects of climate change.

Mr Trump's latest appointments are also quite interesting as he's brought onboard His Campaign Manager and his Campaign communications Team onboard at the White House.    As all have now finally accepted Mr. Trump's win, it is the extent of Mrs Clinton's loss that is vital to be understood.   Mrs Clinton did win the popular vote--but the majority of the Popular Vote margin was in two states only:  California and New York.   Mrs. Clinton lost by over 3 Million Votes in the other 48.    Of all the post-mortems done by Analysts, the most poignant one was by Vice President Biden as he noted that Mrs. Clinton never actually figured out why she wanted to be President.

We also wanted to make sure we feature two key areas we look forward to focusing on in 2017:

5/ Sales has @salesforce, HR has @Workday, marketing has @hubspot/@marketo, finance has @Oracle/@SAP. What is innovation's system of record? pic.twitter.com/ORtJUMDWc2
— CB Insights (@CBinsights) December 14, 2016

We leave you with these thoughts from some of the leading players in our World: 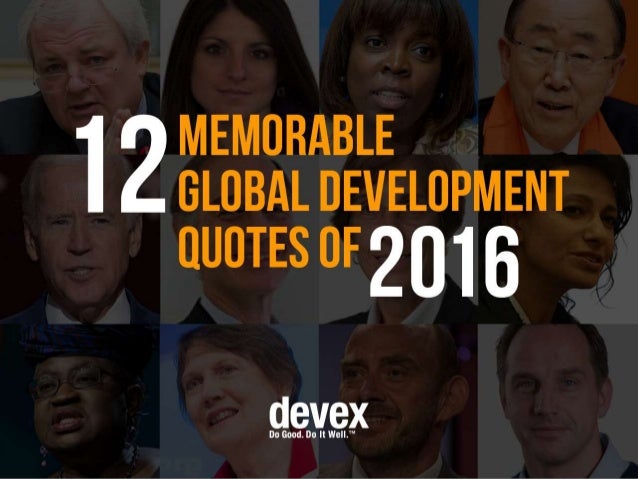 As 2016 draws to a close, Devex looks back at some of the year's biggest events through the words global development leaders have spoken that inspired, provoked or helped us think differently about development work.


We end this retrospective with a simple wish for you and your loved ones:

Onward to the new year with all its' possibilities!!!