Notations On Our World (Special W-End Edition): As a New Week Dawns.....

As we went to press, the talk in Washington was about the #NunesMemo.    There were claims of vindication by The President which was wildly debunked.  Our team released a number of updates on it on our Twitter Feed over the past 36 hours with profound implications that is yet to be determined.    This is also as the temporary funding of the US Government expires as The President spent this Super Bowl Week-End in Florida.

Beyond the United States, It has been quite day in our World as we are monitoring reports out of the Maldives with a coup initiated by the President as the Maldives Supreme Court ordered release of opposition politicians.  This was as a Russian Jet was downed in Syria and pilot was killed.

Iran is gearing up for the annual celebration of the Revolution:  .   One of the leading Opposition figures,  Prince Reza Pahlavi (The Son of the Late Shah) issued a statement to the people (available at his Website here) along with a Grid below that shows the Supreme Leader, the President, the Head of the Judiciary, The Supreme Leaders' Chief of Staff and other leading figures of the Islamic Republic paying homage at the site of the Tomb of the founder of the Islamic Republic while depicting a sense of the realities within the Country:

This depiction underscoring the brave nature of the protests against obligatory Hijab in Iran: 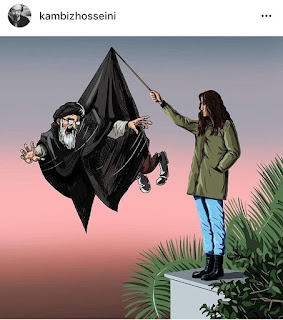 Today, also, is Super Bowl 52 day here in the United States.    As we hope all US Football Fans enjoy the day with the family, our team captured this (also released on our Twitter Channel) earlier about how far we have come and the transformation we have been witness to: