Notations On Our World (Weekly Edition) : On #Iran Watch

The Trump Administration has announced intentions to stop the waivers for the 8 Countries who have bought Iranian Oil.    Based on reporting we've reviewed, we understand that Saudi Arabia, the UAE and Iraq will make up the difference as US Secretary of State has vowed to bring Iranian Oil Sales to Zero which will present even more profound challenges for the Government.

The Iranian Government requested the ultimate authority, the Supreme Leader (Guide) n in the Country to be allowed to spend funds from the National Fund for Flood Repairs--and the Supreme Leader refused stating that other resources must be utilized first--as the Supreme Leader and Foundations under his direct control control an estimated 70 percent of Iran's Economy.   The Tavanah Organization, an Iranian Civil Rights & Education Organization, released this depiction on how the Supreme Leader is condoning drips as Iran continues to deal with floods and the aftermath: 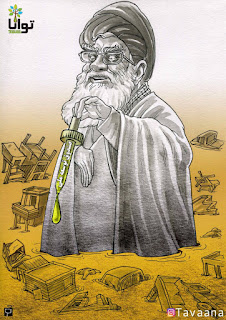 As Iran dealt with Floods, one of the Friday Prayer Leaders focused on prohibiting women from riding bicycles--Tavanah again depicted this as floods decimated Iran: 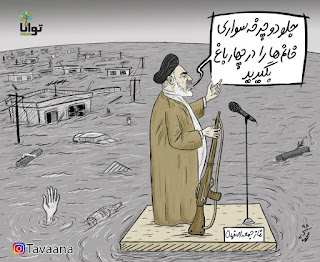 The true nature of the Islamic Revolutionary Guards--declared by the United States to be a terrorist organization--was also depicted as its' key commander, Qasem Suleimani, was the puppet masters of the terrorists in Iraq , Yemen, Syria and Lebanon: 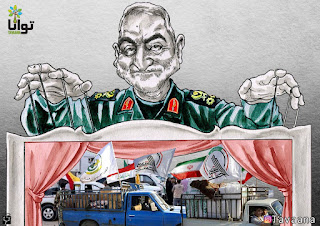 Khameini replaced the Commander of the Revolutionary Guards last week and made other moves to try and be ready as sanctions tighten.   What we found especially interesting was recent comments by the Foreign Minister, Javad Zarif, offering to exchange dual nationals for Iranians being held in various jails.   He claimed he had the authority to do it and had already reached out to the Trump Administration after repeated claims that it was a matter for the Iranian Judiciary as it was indepedent.   In our view, the said claims of an independent judiciary in Iran have no merit.   We here at the Daily Outsider have been urging the release of all dual nationals including Nazanin Zargari-Radcliffe who has been granted diplomatic protection by the UK Government.     We will continue to monitor and assess this over the ensuing days and weeks.