Notations On Our World (Special Edition): As First Night Of the #DemocraticDebate Get Underway.... 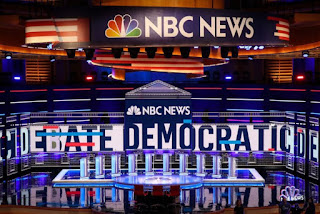 As we went to press, the first of two Democratic Debates began with an address by the Chair of the Democratic National Committee, Tom Perez.

Bloomberg,  the Brennan Center are among the organization's live blogging proceedings right now --President Trump also weighed in as he was on Air Force One flying to the G20 in Japan noting how his Re-Election team would be "Fact Checking" as he also was busy going after Mueller, the Democrats as noted by Susan Glasser:

The key question was raised by Noah Rothman as the threshold will only be raised especially as a number of candidates were excluded from this first round of debates: