Notations From the Grid (Weekly Edition): On #Iran

Our team decided to headline our weekly Notation on Iran with one from our Editor/Co-Founder on an ancient tradition in Iran that goes back over 6000 Years.   We wanted to focus on Iran especially as Iran has been one of the few countries that seems to have maintained an open link with China as the deadly Virus continued to spread--as China has continued to clamp down on dissent and fight a Public Relations Battle to maintain its' status as underscored by this from the Financial Times of London:

Iran has also been clamping down on dissent harshly.     The grid below reflects the signators of the declaration calling for the resignation of the Supreme Guide of the Revolution, Ayatollah Khamieni: 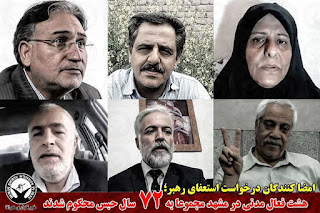 They have been sentenced to a combined 72 Years in Prison.   The spouse of one of the dissidents, Fatameth Maleki, considered it a joke.    Her son was also imprisoned because he had joined the November Protests and was finally released after a hefty bail.   Our team will continue to assess their situation throughout the ensuing weeks and Months.

Iran is also facing an election--as Iran has also begun 10 days of Celebration called Fajr that celebrates the return of the Ayatollah Khomeini, the Founder of the Islamic Republic, to Iran.   Despite a wide-spread boycott by leading Artists, The Annual Fajr Festival has also been going on as well.     In the meantime, some 90 serving deputies in the Majlis (Parliament) have been disqualified by the Guardian Council including Ali Motahari that hereby headlined a recent edition of the Official Government Magazine, Iran: 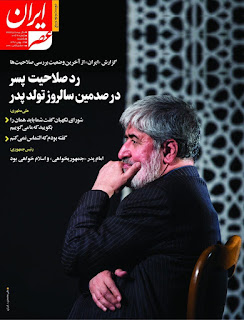 He was disqualified on the centennial birthday of his Father, Morteza Motahari, who was one of the early stalwarts of the Revolution who was assassinated.    Our team found it interesting how he continued to call for participation in the elections even after how his appeal for reinstatement was rejected.

Leading Figures of Iran's Islamic Government led processions to pay their respects to the Founder of the Islamic Republic in the presence of Khomeini's Grandson: