Notations On Our World (Weekly Edition): As a New Week & A New Quarter Dawns....


Welcome to the new Quarter in our Network.

The Easter Week-End began on Good Friday as Israel Army shot over 1500 Gazans and some 64 People were killed during protests on Land Day--The United States blocked a UN Security Council Statement on the attack claiming "bad actors" were trying to take advantage of the situation and Israel rejecting any international efforts.   As we went to press, we were reviewing reports of hospitals in Gaza being overwhelmed and running out of supplies.     Al Jazeera interviewed one 19-year woman, Sabreen Al Masry, who spoke of telling his mother of her expectation to be killed--and as Turkish President Edrogan and Prime Minister of Israel traded barbs over the week-end.

This was also a week that saw President Trump going on a Twitter Tirade threatening NAFTA and killing any prospects of a deal on the DACA deal after promising to do so.   This is also as he continued his realignment of his Administration with the appointment of John Bolton as National Security Adviser.       Trevor Noah and Stephen Colbert shared their thoughts on it:


The alignment included the firing of the VA Secretary by the President and nominating the White House Physician as there is a concerted effort to privatize the services the VA offers.   This is also as The State Department issued a proposal to further Vet US Visa applicants for their Social Media Profile.    There is also the Iran Deal that all indications are is on Life Support.   Our team captured this "screen capture" from the Guardian of London over Easter Weekend that reflects the profound state of affairs in that regard--it must be noted that even the Israeli Army Chief of Staff noted that the Iran Deal works despite what he deemed its' flaws and our team released a headline on it courtesy of Haaretz on our Twitter Channel: 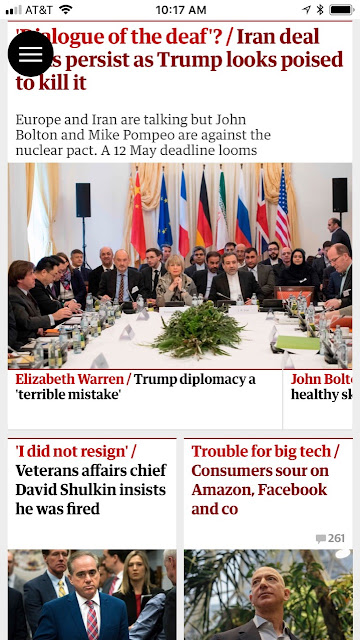 Our team will be exploring the Amazon & Facebook challenges in our Visions Property over the ensuing days & weeks in the aftermath of the recent controversies that has Facebook besieged and the most recent attacks by President Trump on Amazon--including calling the agreement Amazon and the US Postal Service have a "Sham"--despite findings that determined otherwise.

Despite the profound challenges, our team continues to remain hopeful as  we wanted to end our first edition of "Notations" with this from the Holy Father Francis  as he delivered his Easter Homily at the Vatican on Easter Sunday as he reminded the World about the on-going carnage in Yemen, Syria and all around the World:

“Dear brothers and sisters, Happy Easter! Jesus is risen from the dead!

This message resounds in the Church the world over, along with the singing of the Alleluia: Jesus is Lord; the Father has raised him and he lives forever in our midst. Jesus had foretold his death and resurrection using the image of the grain of wheat. He said: “Unless a grain of wheat falls into the earth and dies, it remains alone; but if it dies, it bears much fruit” (Jn 12:24). And this is precisely what happened: Jesus, the grain of wheat sowed by God in the furrows of the earth, died, killed by the sin of the world. He remained two days in the tomb; but his death contained God’s love in all its power, released and made manifest on the third day, the day we celebrate today: the Easter of Christ the Lord.

We Christians believe and know that Christ’s resurrection is the true hope of the world, the hope that does not disappoint. It is the power of the grain of wheat, the power of that love which humbles itself and gives itself to the very end, and thus truly renews the world. This power continues to bear fruit today in the furrows of our history, marked by so many acts of injustice and violence. It bears fruits of hope and dignity where there are deprivation and exclusion, hunger and unemployment, where there are migrants and refugees (so often rejected by today’s culture of waste), and victims of the drug trade, human trafficking and contemporary forms of slavery.

Today we implore fruits of peace upon the entire world, beginning with the beloved and long-suffering land of Syria, whose people are worn down by an apparently endless war. This Easter, may the light of the risen Christ illumine the consciences of all political and military leaders, so that a swift end may be brought to the carnage in course, that humanitarian law may be respected and that provisions be made to facilitate access to the aid so urgently needed by our brothers and sisters, while also ensuring fitting conditions for the return of the displaced.

We beseech fruits of reconciliation for the Holy Land, also experiencing in these days the wounds of ongoing conflict that do not spare the defenceless, for Yemen and for the entire Middle East, so that dialogue and mutual respect may prevail over division and violence. May our brothers and sisters in Christ, who not infrequently put up with injustices and persecution, be radiant witnesses of the risen Lord and of the victory of good over evil.

We invoke on this day fruits of hope for those who yearn for a more dignified life, above all in those areas of the African continent deeply affected by hunger, endemic conflicts and terrorism. May the peace of the risen Lord heal wounds in South Sudan and the strife-torn Democratic Republic of the Congo, and open hearts to dialogue and mutual understanding. Let us not forget the victims of that conflict, especially the children! May there be no lack of solidarity with all those forced to abandon leave their native lands and lacking the bare essentials for living.

We implore fruits of dialogue for the Korean peninsula, that the discussions under way may advance harmony and peace within the region. May those who are directly responsible act with wisdom and discernment to promote the good of the Korean people and to build relationships of trust within the international community.

We also beseech fruits of peace for Ukraine, that the steps taken to favour harmony may be consolidated and facilitated by the humanitarian initiatives needed by its people.

We also invoke fruits of consolation for the Venezuelan people, who, as their bishops have written, are living in a kind of “foreign land” within their own country. May that nation, by the power of the resurrection of the Lord Jesus, find a just, peaceful and humane way to surmount quickly the political and humanitarian crises that grip it. May welcome and assistance not be wanting to its sons and daughters forced to abandon their homeland.

May the risen Christ bring fruits of new life to those children, who as a result of wars and hunger, grow up without hope, lacking education and health care; and to those elderly persons who are cast off by a selfish culture that ostracizes those who are not “productive”.

We also implore fruits of wisdom for those who have political responsibilities in our world, that they may always respect human dignity, devote themselves actively to the pursuit of the common good, and ensure the development and security of their own citizens.

Dear brothers and sisters,
The words heard by the women at the tomb are also addressed to us: “Why do you seek the living among the dead? He is not here but has risen” (Lk 24:5-6). Death, solitude and fear are not the last word. There is a word that transcends them, a word that only God can speak: it is the word of the resurrection (cf. JOHN PAUL II, Conclusion of the Way of the Cross, 18 April 2003). By the power of God’s love, it “dispels wickedness, washes faults away, restores innocence to the fallen, and joy to mourners, drives out hatred, fosters concord and brings down the mighty” (Easter Proclamation).

Happy Easter to all!”