Notations From the Grid (Special Election Watch): On The State of Affairs in our Home State of #California Right now 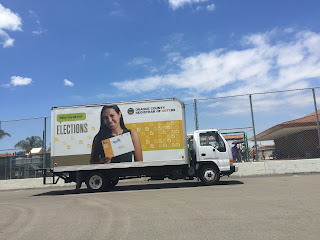 Election season in California is in full force and our friends at the Nooner just released this earlier today to provide updated guidance as the Election Campaign continues--people are voting already as our home state holds its primary on June 5.

As our team analyzed the data, it is interesting how the Republicans continue to suffer in California:


From PDI (as reported by counties at the end of the day yesterday--district results with demographics here):

BALLOTS MAILED: 11,547,095
BALLOTS RETURNED: 1,404,822
Statewide: Dems: 622,438  / Reps: 475,595  / NPP: 245,892 / Others: 60,897
Ethnic (percentages are share of ballots mailed out and those received by county election offices. Of course, no ballots are counted until 8pm Tuesday night.):
The numbers are also likely a bit distorted by the Voters' Choice Act. Under the Act, five counties are mailing vote-by-mail ballots to every voter, rather than to those who requested them, either per election or permanently, in the past. The counties are Madera, Napa, Nevada, Sacramento, and San Mateo. Voters can return ballots by mail, or drop them off at voting centers or in drop-box locations. They can also vote in-person at voting centers.
The one thing is that the counties are likely underrepresenting African-American voters and perhaps Latino voters. All that means is that you can't draw on election night results by ethnicity. We just have so many more metrics to follow, which makes predictions that much more difficult.
VOTER REGISTRATION: The Secretary of State's official 15-day pre-election voter registration report isn't out yet (perhaps today), but Political Data Inc. released its data yesterday. Like the Secretary of State, PDI gets its data directly from the 58 counties.
The news is bad for California Republicans, as it appears No Party Preference voters have exceeded the number of Republican voters for the first time.
Now, of course, No Party Preference is relatively new. But, we can compare with teh same 15-day period in the June 2014 primary:
So, from June 2014 to June 2018, we have the following changes:
While minor party and Republicans are shifting to No Party Preference, Democrats continue to grow, mid-term to mid-term. Democrats have lost 283,924 since November 2016 presidential general and Republicans have lost 276,414 as part of the normal shrinking of the roles between the presidential and the mid-terms, so it's not all bad news for Republicans.ongressional races this year, we're talking 5-7 out of 53 seats.

As we await the final month of our State's Budget year, our team hereby closes out the month with a review of the Governor's May Budget Snapshot and the Analysis presented by the team at Association of Claifornia Cities-Orange County:

ACC-OC Legislative Update: May Budget Revise
The May Revision, released by Governor Brown late last week, continues to strike a balance between a historic budget surplus and an expanding state economy. The Governor updated his original budget, which totaled around $132 billion in January, to a nearly $138 billion revised budget that was released on Friday. The new projected surplus of $8.8 billion is up over January's $6.1 billion projection. Governor Brown has proposed to place nearly $6 billion of that surplus into the State's two reserve accounts: its regular operating reserve and the Rainy-Day Fund created by California voters in 2014. Under the proposed May revision, The Rainy-Day Fund would grow to its constitutional limit of $13.8 billion.
The United States and the State of California have experienced one of the longest periods of economic expansion in history, but as data proves economic expansions don't last forever. While the State Legislature has shown an appetite for quick expenditure of the budget surplus, Governor Brown has advocated for a more conservative approach. The May Revise always represents a series of compromises between the Governor's Office and Legislative leadership. The Legislature has made clear that they wish to expend the State's hefty surplus, and the Governor's Office has cautiously agreed, so long as these expenditures are limited to one-time expenses that don't increase the State's liability in the long term.

A summary of these expenditures and other major updates from the May Revision can be seen below
Highlights
Infrastructure ($2 billion)
Years of deferred maintenance have left the state with a substantial backlog of projects. The May Revise targets surplus dollars to the universities, courts, state facilities and flood control. Investments are also proposed for high-priority capital expenditures.
Homelessness ($359 million)
In the coming year, new revenues dedicated to addressing the rising cost of housing, such as monies from housing bond and fees on real estate transactions, will begin pouring into the State and the counties. The May Revision includes a $359 million bridge package of funding to focus on the State's most vulnerable populations and assist local governments in their immediate efforts to address homelessness. This allocation also includes $50 million for individuals with mental illness.
Housing Assistance ($15 million)
The May Revision proposes $15 million for the Home Safe Pilot Program, that will be funded within the Adult Protective Services. The pilot program provides housing-related support to seniors experiencing homelessness or at risk of losing their homes by providing temporary rental or utility assistance, housing repairs, landlord mediation, and case management. The funding will be available to participating counties over a three-year period with a local match.
Emergency Shelter Aid (250 million)
The May Revision creates a one-time Homelessness Emergency Aid block grant of $250 million administered through Continuums of Care (federal HUD designations) for cities, counties or joint powers authorities that declare a local shelter crisis and identify city-county coordination. Grants can be used for emergency housing vouchers, rapid rehousing, emergency shelter construction, and use of armories to provide temporary shelters, among other activities.

Mental Health ($312 million)
The May Revision includes funding for enhanced early detection of mental health problems and the education of mental health professionals. The Revision includes the repayment of $254 million plus interest in mandate claims to give counties additional resources for youth with mental illness. The May Revision also proposes to place the $2 billion No Place Like Home bond on the November ballot to accelerate the delivery of housing projects to serve the mentally ill, like Permanent Supportive Housing.
Climate Change ($1.75 billion)
Earlier this year, the Administration proposed $1.25 billion in additional Cap and Trade spending from auction proceeds. The May Revision proposes $50 million in additional auction proceeds to implement the recently released Forest Carbon Plan that aims to improve the health of California's forests and wildlife against the increasing threats of fire.
Cannabis ($133.3 million)
The May Revision includes an additional $133.3 million for cannabis-related activities, including the processing of licenses and permits, enforcement, laboratory services, information technology, quality assurance, and environmental protection. The proposals are funded by the Cannabis Tax Fund and the Cannabis Control Fund (which receives revenue from licensing fees), Statewide Issues and Various Departments. Given that the state is in the early stages of implementation, the May Revision provides funding for these programs on a two-year limited-term basis. This will provide the Administration the opportunity to evaluate the ongoing level of funding needed to support these various activities.
Next Steps
The May Revise is the last formal step in the legislative process. The legislature will continue to make revisions to the latest budget version through May and June. Changes are anticipated to focus heavily on formally negotiating how the proposed budget surplus allocations are spent. The Senate and Assembly will continue this process through their budget subcommittees, and will make a final recommendation to their respective Chamber between now and June 15. After any differences between the two houses are resolved through the bicameral conference committee, a final budget will be voted on in both houses by June 15. Subsequently, the Governor has until July 1to sign the spending bill into law.