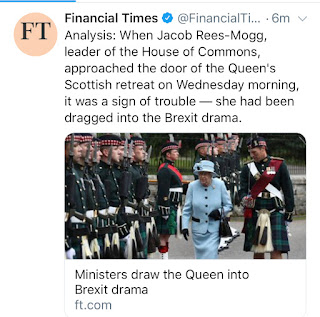 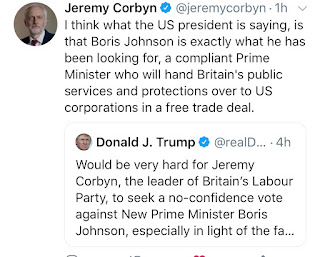 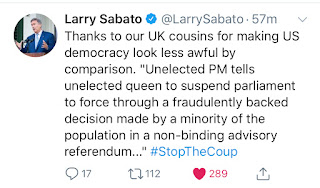 As we went to press, we were assessing the latest move by the UK Prime Minister to by-pass Parliament to force through a No-Deal Brexit.   The European Union is interestingly silent on it as British MP's begin moves to try and stop a deal.   Whether it will mean a vote of no confidence in Boris Johnson's Government remains to be seen--what is clear is that battle lines have been drawn as the United Kingdom deals with the looming October 31, 2019 headline.   President Trump--through his Twitter Feed that reflects his thinking--chimed in on the debate with a response for the UK Labour Leader, Jeremy Corbyn.   This is as there have been dire reports of a no-deal Brexit underscored by this we just received courtesy of the team at the Financial Times as we regularly feature their front page daily on our Twitter Channel:

Meanwhile, back on the continent of Europe, Italy avoided a snap election as the Democratic Party and the Five Star Movement struck a deal to avoid an election with the caretaker Prime Minister Conti asked by the Italian President to form a new Government.      We view it as a good development for the sake of Italy and Europe.